What are Contrails? You have seen them many times but how are they formed? Chemtrails? 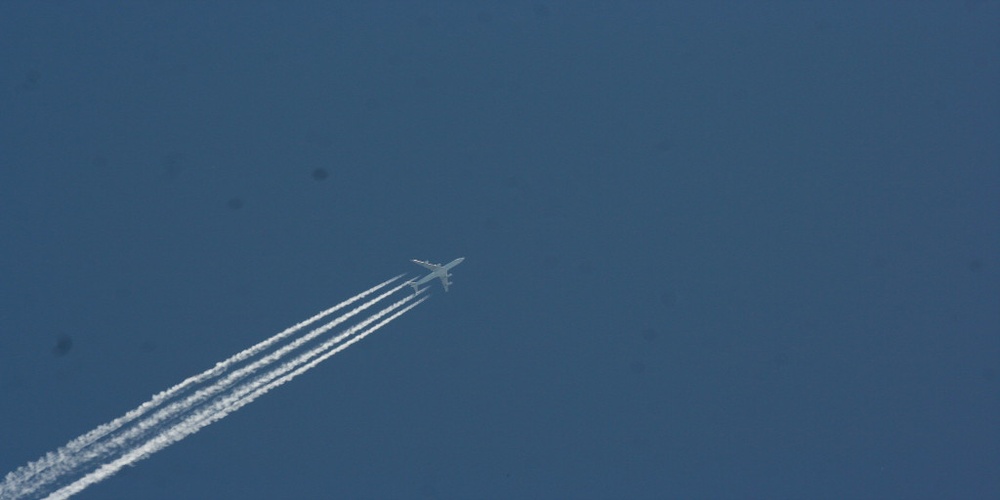 What are Contrails?  You have seen them many times but how are they formed?  Chemtrails?

Engine Exhaust and the Formation of Contrails

Both jet and propeller engines can form contrails.  Warm moist air is exhausted from an engine and then mixes with the ambient (surrounding) air that has a low temperature and low vapor pressure (pressure exerted by the water vapor). As you can imagine, the air behind an engine mixes thoroughly.

Remember, the colder the air is, the less water it can hold.  When warm moist air mixes with the cold air, condensation is likely to follow.  The newly formed water droplets crystallize into ice.

You can replicate this process on a cold day.  You breath out warm moist air that is then mixed with cold air.  The temperature of the warm moist air you exhaled drops and the moisture is released (Condensation).  The visible exhaled air is a condensation trail.

How long does a contrail last?

The formation and life of a contrail is dependent on the condition of the air.  If the air is humid (contains a high amount of moisture) there is more to be condensed when the temperature drops.  Higher humidity also means that the life of the contrail is extended.

As you can imagine, the wind also plays a role.  Wind can also help spread out a contrail.

Taking the breathing example from above; if there is a high level of moisture in the air, you will be able to see your breath for a longer period of time.

Is a contrail always one continuous line behind a plane?

Patterns of multiple contrails can be seen when the moisture level is high. Satellite images confirm lasting contrails with various patterns caused by "cris-crossing" plane travels.  This is common in a region with heavy traffic.  If the contrails persist, they can begin to spread out and around much like a cloud.

Can Contrails affect the climate?

A contrail is very similar to a Cirrus cloud.  Cirrus clouds both reflect the sunlight away from the earth and trap heat within the earth.  The additional cloud cover can be significant.  If the conditions are right (high humidity) it is estimated that the cloud cover could be increased by as much as 20%.  After comparing the total amount of heat reflected and the total amount of heat trapped in, it is estimated that contrails would result in a small net gain of heat.

The theory of chemtrails can account much of its growth on the internet. The basic chemtrail theory is that military aircraft release additional harmful chemicals. Concerns over chemtrails date back to 1977 with the idea gaining steam as information became easier to distribute in 1999. Once the theory spread, pictures of contrails, with the title of chemtrails, began popping up on the internet.

Conspiracies include malicious reasons for the release of harmful chemicals, such as Aluminum and Barium.  The conspiracies include population control and climate modification. Others are simply concerned about the byproducts released from the engine exhaust aside from just warm moist air.  These include nitrogen oxides, soot, carbon dioxide, and sulfate particles.

The thin white trails of ice-crystal clouds were caused by hundreds of heavy bombers attacking from 25 to 30 thousand feet. If conditions were right, water vapor added to the exhaust from the planes caused the contrails to appear.  The lasting contrails were documented by a significant amount of photographs.

During “daylight” raids, if conditions were right, the anti-aircraft guns could see the bombers at the end of the contrails and quickly adjust their guns to their targets.  Additionally, there were reports of pilots having a hard time seeing enemy pilots they were chasing due to the thick contrails.  Thick contrails also made it difficult for bombers to stay in formation.

Air Force Weather forecasters were directed to try to guide planes to fly at safer altitudes where conditions would not produce contrails.