Smog and Haze. What are they and what is the difference? 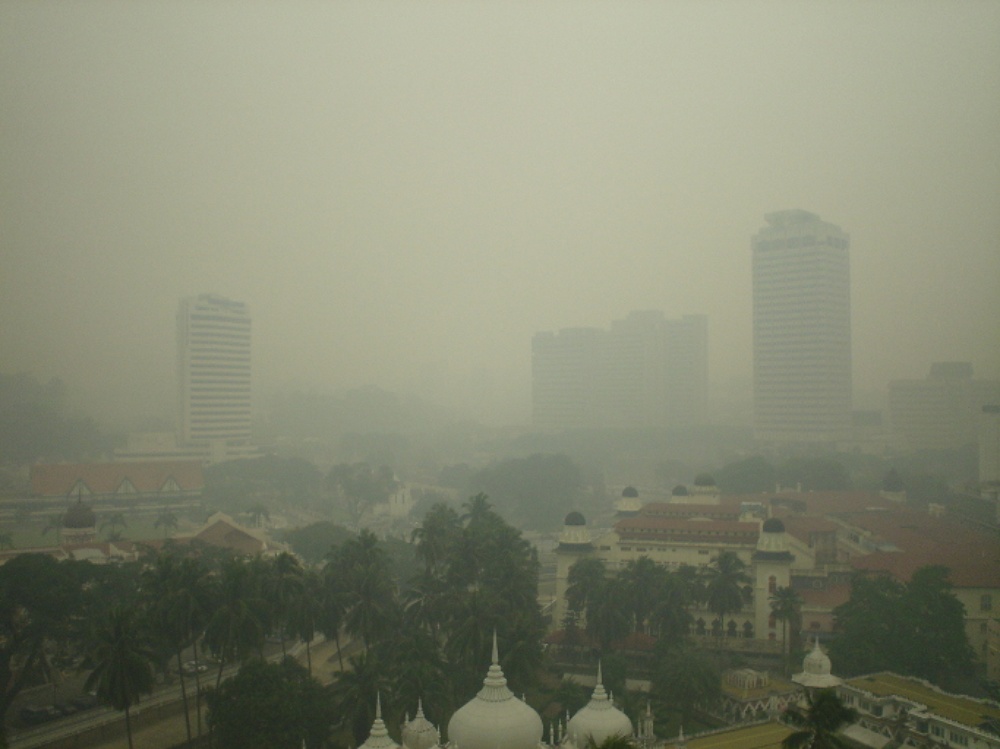 Haze... The term haze has been used to describe the reduced clarity of several products including alcohol.  As a result, most of us are familiar with the meaning of the term.  But Haze is an actual weather event, with health concerns, that can be affected by human and naturally occurring activities.

A clear understanding of the term Pollutant helps to make sense of Haze and Smog.  A pollutant is a substance introduced into the environment with undesirable effects.

Haze is the result of an accumulation of fine suspended dry particles, including dust, smoke, soot, and salt.  Specific sources include both fires (planned and unplanned) and wind which sweeps up fine particles from the ground and adds them to the atmosphere.  In all, the sources are wide ranging and include any activity that increases the particle count in the lower atmosphere. If the particles continue to accumulate, without a way to escape, the particles form a "blanket" that covers a region.  Conditions that would allow the particles to be dispersed would include wind and air streams. Conditions that would encourage Haze include limitations to the mixing of the air (low wind or temperature inversions), moisture, and sunshine.

Normally the temperature of  the air decreases with altitude.  In some cases the temperature of a thin layer of air increases with altitude.  The result is a temperature inversion. This thin layer traps the air below it from mixing with the air above it.  Convection, which normally casues in surface air to rise and mix with air at higher elevations, is diminished by a temperature inversion. Unless there is a strong horizontal wind, particles in the lower atmosphere have no where to go and conditions will become perfect for Haze to develop.

The most noticeable effect of Haze is a clear skyline being replaced by a slightly brown or blue haze.  Haze reduces the brilliance of sunsets with subdued colors and diminishes the brightness of the stars.  Haze also reduces the visibility of pilots which can be led to dangerous conditions; especially for small private aircraft.

Sulfurous Smog is formed during cool temperatures with a high levels of moisture in the air.   Sulfur Oxide and smoke are a byproduct of  burning coal, steel manufacturing, and oil refinement.  When emitted into the lower atmosphere Sulfur Oxides combine with oxygen to form Sulfates. Sulfates scatter more light than other particles and help form a fog composed of Sulfuric Acid.   The Sulfuric Acid fog then mixes with the smoke to form Sulfurous Smog.

The "Great Smog" event has become an example of just how devastating Sulfurous Smog can be.  In London, December 1952, all the conditions for Sulfurous Smog developed including burning coal emissions and a high pressure cold front resulting in an inversion layer with no horizontal winds.  In central London the visibility was severely diminished to the point that people could not drive or even properly navigate the streets.  The fatalities among residents was extreme with members of the population with previous respiratory issues being hit the hardest.  It is hard to account the exact amount of  directly related deaths but there was a confirmed increase of 4000 deaths in the region compared to the same period in previous years.

Nitrogen Oxides, released from fossil fuel vehicle emissions, and Volatile Organic Compounds (VOC) released from chemical evaporation, build up in the lower atmosphere. Sunlight then alters Nitrogen Oxide to form Ozone in the lower levels of the atmosphere.  Peroxyacetyl Nitrates are formed as Nitrogen Oxide mixes with the VOC.  Photochemical Smog can result in health issues including respiratory issues and eye irritations.  Concerning agriculture, plant growth is reduced and added toxins result in lower crop production.  For Infrastructure there is reduced life for plastics, rubber, building materials, and paints.

Just like Haze, Smog reduces your visibility; however, instead of a blue/brown there tends to be a tint of yellow/brown.